What Can We Learn from Mice: The Science of Transgenic Technology

Humans have made great advancement in science and technology. This advancement is not only limited in the way we use to talk or entertain ourselves. It can also be seen in the field of medicine and agriculture. There have been new drugs that can cure diseases that previously have no cure. Foods we eat can be improved on; thanks to genetic engineering which is making all these advancement possible.

This genetic engineering which is made possible by recombinant DNA technology uses several animals and plants to achieve positive results. Of course without such animals like mice; which have almost same genetic makeup as human, it would have been difficult to effectively test some drugs and improve on some drugs and foods. It can be therefore said that mice sacrifice themselves for the advancement of human race.

What are “Transgenic Mice” ? 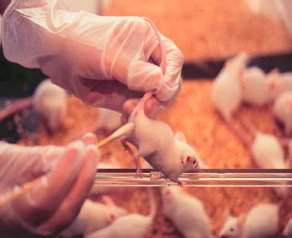 Although several steps in the evolution of transgenic technology had been performed in the 1970Zs, transgenesis was not widely recognized before Palmiter introduced the human growth hormone gene into mouse zygotes by pronuclear microinjection and transgenic offspring demonstrated dramatic growth. Since then transgenic techniques have been of immense importance, as they allow new approaches to life science research that general cell culture techniques cannot deliver. The manufacture of large quantities of complex, bioactive proteins like hormones or growth factors for therapeutic purposes (pharming) is only one example of a wide range of different applications for the study of genetic regulation, animal development or disease pathology. For this purpose, foreign DNA is introduced into fertilized oocytes or embryos (blastocysts) of mice, rats and other mammals.

Transgenic animals are frequently created by two different techniques: microinjection of DNA into the pronucleus of zygotes and injection of embryonic stem cells into blastocysts. The procedure is done with the help of a complete microinjection set-containing of a microscope, micromanipulators, microinjectors and micropipettes.

Microinjection of DNA into the pronucleus 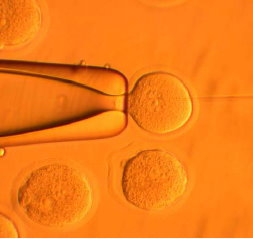 The pronuclear microinjection method of producing a transgenic animal is based on the introduction of linear DNA sequences into the chromosomes of fertilized eggs. The foreign DNA must be integrated into the genome prior to the doubling of the genetic material that precedes the first cleavage in order for the animal to be born with a copy of this new information in every cell. For several hours following the entry of the sperm into the oocyte, the male and the female pronuclei can still be seen individually under a normal light microscope and they have not fused yet into a so called zygote. The foreign DNA may be injected into either pronuclei with no difference in results; however, the DNA is typically injected into the male pronucleus because it is slightly larger and closer to the oocyte surface. These oocytes are subsequently transferred into the uterus of pseudopregnant recipient animals. The offspring is screened to confirm a successful integration of the gene of interest for use in further studies.

Embryonic stem cells (ES cells) are derived from the inner cell mass of blastocysts (early embryos). These cells are pluripotent, which means that they can develop into almost any type of tissue. ES cells are used for more precise modifications of the mouse genome. This technique makes it possible to insert as well as remove or modify DNA sequences. Knock-out, knock-in and conditional mutant mice can be produced with this method. The first step is the removal of ES cells from a blastocyst. After transfection of the ES cells, selection, cloning and screening methods make it possible to detect ES cell clones that demonstrate the desired, site-specific recombination. After microinjection of the genetically modified ES cells into blastocyst-stage embryos the ES cells divide and become part of the embryo. The following chimeric animals will subsequently transmit the recombinant genotype to their offspring, if the ES cells have contributed to their germ cells.

Science has made it possible to modify genomes of living organisms so that they can be used for modern genetic technology. This modification process is referred to as “genetic engineering”. With modern genetic technology, genes of one species can be modified in a lab; it can as well be transplanted from one species to another. This is made possible by recombinant DNA technology. Therefore the organisms which have had their genomes altered are known as transgenic. Most of these transgenic organisms are generated in lab for research purposes.

Organisms that have had another gene introduced into their system usually get some special function or ability.  Another example of transgenic organism can also been in agriculture. With help of genetic technology, soy beans have been genetically engineered to contain glyphosate-resistance genes. There are also instances of other crops which have been engineered so they can grow well in soil where there is high concentration of salt. Furthermore, some crops have been engineered to contain insects’ pest killing bacterial toxin known as Bt toxin. Crops that have been modified genetically are known as genetically modified organism or “GMO’.

There are extensive list of selected group of animals, plants and micro-organisms that can be used for research purposes in labs around the globe. No doubt, man and mouse have an age-long love-hate relationship since man discovered science. Our need for this creature stretches far beyond cartoons such as Mickey Mouse. Mouse which is also known as Mus Musculus in Latin, and once seen as an agricultural pest are now use to make advancements in human health.

For many centuries now, mouse has becomes man’s preferred mammalian model for genetic research. Scientists developed a mouse models at the start of biomedical research by choosing and breeding specific mice so that they can bear offspring with specific desired characteristics. In recent years, scientists are using mice to simulate human genetic disorders so they can be able to study their development and test new therapies.

Benefits of Mice to the Science of Transgenic Technology

Mice and humans have many genetic features in common. Scientist can therefore gain a valuable insight into how humans function by examining the anatomy, physiology and metabolism of a mouse.

Mouse genomes bore some similarities to that of human, making them very useful for the study of human diseases. Moreover, they are cheap to obtain and can easily be seen unlike other lab animals. It is also very easy to look after mouse.

Mice are small and very convenient to house. They reproduce quickly. Most mice can reproduce as often as every 3 weeks which will provide the scientist enough mice to work with.

It took around 10 weeks for a newly born mouse to give birth which gives the scientist opportunity to observe several generations at once. They also have short lifespan. This implies that scientist can conveniently measure the effects of mouse ageing.

There are other benefits of using mouse for laboratory research. Overall, they make the best lab animal in researching for human related medicine.

How to Breed Mice for Transgenic Technology?

Breeding transgenic or gene targeted mice for the first time can be a difficult task. The tips below will help you to get started:

Some Vital statistics of the House Mouse, Mus Musculus